The Humpbacked Bridge that joins the Gardens to the Kelvin Walkway was reopened in mid-September.

September didn’t leave without a violent goodbye, in the shape of Storm Ali.

The Gardens had to close completely; which is a rare event. The amount of branches and trees coming down on paths made this a necessity and, one day later, the Gardens team aided by the City Arbor Team started to clean up trees and reopen paths. 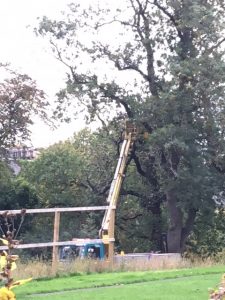 A large beech failed beside the Queen Margaret Bridge and fell safely into the River Kelvin. 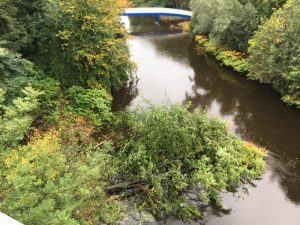 On a brighter note we saw the Lord Provost and the Chinese Consul General open an exhibition in the Kibble Palace. This was about the Chinese Community’s experiences of Glasgow life from the 1950s onward. Its based on the personal tales of elder community members who have been interviewed as part of a project co-ordinated by the Chinese Community Development Partnership. 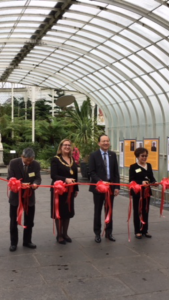 As part of our review of the National Collection of Begonias held at Glasgow Botanic Gardens we have managed to fund the services of horticultural taxonomist Dr Alan Elliott. In his spare time working at Royal Botanic Garden Edinburgh, Alan has been contributing to the Flora of Nepal.

The Friends of Glasgow Botanic Gardens have helped Alan with funds to cover accommodation for his latest expedition to Nepal. In the latest photo update Alan can be found pressing plant specimens at Jajarikot Khalanga, in this case a species of endemic Himalayan Clematis. (Clematis gouriana).

Maybe we could start to gather pictures of Glasgow Botanic Gardens t shirts in exotic places? 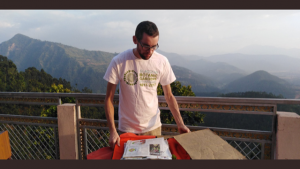 Finally, its back to October in Glasgow, and bright Acer colours down by the main gate. 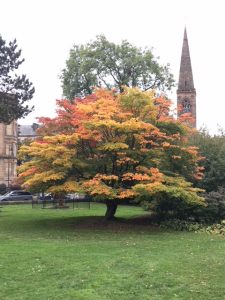