Happy New Year to all visitors and Friends of Glasgow Botanic Gardens.
We will hopefully bring you lots of exciting events and highlight interesting additions to the collections over the next couple of months.

One interesting point to make is that 2020 marks the 200th anniversary of the arrival of renown plant collector David Douglas to Glasgow Botanic Gardens. 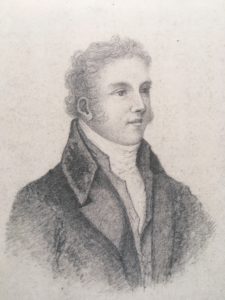 The picture above shows a sketch of the young David Douglas and is reproduced by kind permission from Dr Henry Noltie, RBGE

Douglas moved to Glasgow from his foreman position at Valleyfield House, Fife in the employment of Sir Robert Preston.
During his time working at the Botanic Gardens he attended botanical lectures at the University of Glasgow given by W.J. Hooker. Hooker noted Douglas as a man worthy of his support, and would eventually introduce him to Joseph Sabine, the Honorary Secretary of the Horticultural Society.(Forerunner of the Royal Horticultural Society)
When David Douglas left Glasgow Botanic Gardens as Head Gardener in 1823 he travelled to London where the Horticultural Society had just started sending plant collectors to Africa, China and India. David Douglas was pencilled in for collecting trips to China but given the unstable Chinese political situation he was sent instead to North America. It was in North America he came across the plants that would be eventually associated with one of Scotland most intrepid plant hunters.

In the arboretum at Glasgow Botanic Gardens you can see Douglas Fir, Grand Fir, Broad Leaved Maple, Tassel Bush, Western Yellow Pine and Sitka Spruce which are among the most planted of Douglas’s introductions. The trees in Glasgow date from the establishment of the arboretum in 1979 but other sites such as Dawyck Botanic Garden near Peebles in the Scottish Borders and Curraghmore in County Wexford, Ireland still have trees grown from seed collected by Douglas.
In Scotland, good sites for looking at mature trees with Douglas associations include Benmore and Dawyck Regional Gardens of RBGE, Diana’s Grove, Blair Castle, Blair Atholl, Reelig Glen, Inverness, Drumlanrig Castle Dumfrieshire and Ardkinglas Castle, Argyll.